Remember when Zuckerberg said times were going to change for the users on the social media leviathan’s platform? Well, now under the banner of fighting fake news, Facebook is outsourcing the fact-checking to liberal countries (Canada, for instance). That is when it’s not handing the job off to the agenda-driven hacks at PolitiFact and Snopes who have been proven to be stacked with leftwing ideologues. It may be time for Congress to police the police when comes to ensuring fair and balanced social media.

Facebook announced last year that they will be using third-party fact-checkers to root out “fake news” on their platform. At the time of the announcement, conservatives sounded the alarm about how some of the fact-checkers they’re using are left-wing hacks like PolitiFact and Snopes (who recently, with straight faces, fact-checked a piece of satire from The Babylon Bee).

A recent warning that accompanied an article I wrote for PJM highlights the fallibility of Facebook’s fact-checking program.: 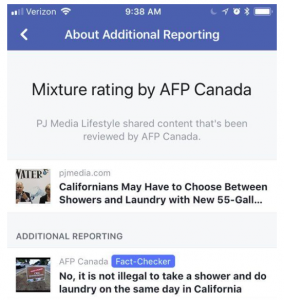 Why a Canadian outfit is fact-checking U.S. news is anyone’s guess, but they clearly flagged my article in error. [It was brought to my attention after this article was published that AFP Canada is part of France’s state-run Agence France-Presse, so let me rephrase that question: Why has Facebook chosen a state-run French news outlet to fact-check U.S. news?]

Facebook deprioritized my article after AFP Canada reported this:

No, it is not illegal to take a shower and do laundry on the same day in California

While some media outlets did indeed report (more or less) falsely that California had made it illegal to shower and do laundry on the same day, I made no such claims. In fact, having seen other reporting making that claim (stretching the truth a bit, in my opinion) I conscientiously avoided making it.